Difference Between ReactJS and VueJS 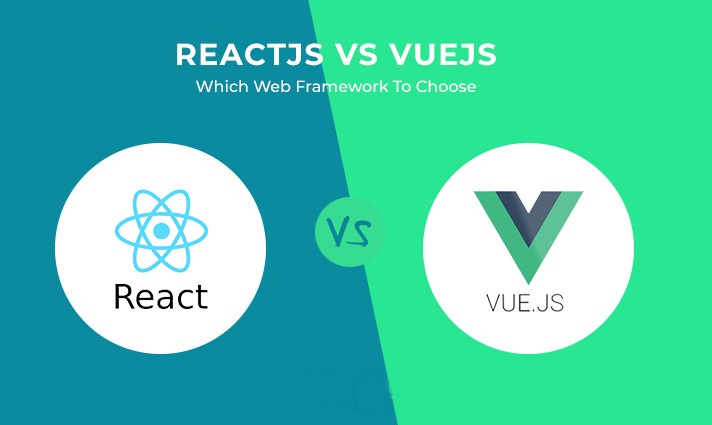 Difference Between ReactJS and VueJS

As we all know, JavaScript has developed exponentially in popularity over the years and is now one of the most widely used platforms for developing web applications. Through the passing of time, developers have more exposure to front-end development resources, making the decision-making task more complicated.

However, the decision must be made expressly centered on the project specifications and the production team’s competence. In this post, we will go through the two most popular frameworks on the market: ReactJS and Vue.JS, to help determine the best choice for your company.

ReactJS vs VueJS – Which framework you should choose for app development

Why is it so difficult to pick between ReactJS and VueJS?

The fight between two of the most powerful rivals, React JS and Vue JS, has intensified significantly. However, making a distinction between the two is becoming difficult because both are extremely competent and provide intelligent features that make the job of developers easier.

What fascinates you with ReactJS?

ReactJS, as we all know, is a Facebook-developed open-source JavaScript application. It is mostly used to design user interfaces. Single-page apps are created using React software creation.

You may also use it to build cross-platform smartphone apps. You may use virtual DOM to build a particular data framework for making modifications to the browser and upgrading it.

ReactJS has the following advantages:

ReactJS is a simple programming language to learn as opposed to other front-end applications, but it requires knowledge of CSS and HTML.

When you recruit a React.JS software developer, you should expect them to reuse code components from several grades in the project.

Data only flows in one direction

React guarantees the data flows in just one way, allowing it to be downloaded. The key benefit of the single path is that smaller data does not affect big data, allowing users to develop modifications without interference.

React.JS frameworks are very SEO-friendly, helping you to remain ahead of its competition.

The modules are the focus of React.js. React.js systems are made up of several different modules, each with its own system of protocols and reasoning. These parts can be recycled, which helps you save time and money while working on big projects.

React.js innovations are emerging at such a fast rate that there is not enough time to build adequate documentation. To get around this issue, web designers write their own directives as new technologies and releases become available in their projects.

Only the View component of the MVC model is supported by React. As a result, you will have to rely on other technology as well. The makers, on the other hand, see that as an advantage because it allows total freedom. As a result, each project will tend to be unique.

The rapid pace of growth has both advantages and disadvantages. In terms of disadvantages, since the environment is always changing, some developers are hesitant to learn new ways of doing things on a daily basis. For all of the constant updates, it can be impossible for them to consider these improvements.

Vue.js was released shortly after React.js in 2014, and it has since risen to be one of the most popular Mainstream JavaScript frameworks in the world. It is also a well-known method for creating user interfaces, similar to React. Since the core library focuses solely on the display layer, it can be used to create immersive single-page web apps.

Vue is an easy choice for programmers who are familiar with other JavaScript frameworks because of its consistency and usability. The syntax of Vue is clear and easy to understand. Since Vue modules are a mix of JavaScript and HTML, experienced developers who start working with it quickly learn how to use it.

When developing an application, errors are unavoidable. What counts most, though, is how quickly you can locate and correct mistakes. The same is true with Vue.js. It has a basic structure that aids programmers from small to large-scale models and detects error blocks.

Vue javascript, unlike other implementations, can be used as both a library and a rich platform. The scalability of Vue js is one of the reasons why people like it. It can be updated, adjusted, and scaled up to meet the specific requirements. The REST API can also be used if you need to create any integrations or construct an app.

Easy to learn and use

Vue.js is very easy to learn and build because it comes with large-scale models. It also saves a lot of time for developers because of its simple format, which allows you to find errors in the blocks easily.

Vue.js’ data analysis is the only area where it outperforms React JS. It is praised for its comprehensive documentation. If you are a novice, you may need to know the basics of JavaScript and HTML.

One of the most appealing aspects of using Vue js is its small size; you could get a ready-made template that is just 20KB. For other platforms including React.js, Angular, and jQuery, the scale is unbeatable.

Common plugins are useful because they work with a variety of other tools to simplify production. Vue.js’ drawback is that it lacks the majority of popular plugins.

If you are using the Vue javascript software on an earlier version of Safari or iOS, you will probably run into any issues, but they will be minor.

Flexibility is awesome, but it is not necessarily good and when you are working on big projects with developers, it can create issues. More inconsistency and defects in the coding are caused by over-flexibility. Projects will be delayed as a result of this exemption.

Both React and Vue are excellent tools for creating immersive user interfaces. You must consider multiple considerations when deciding which one is best for your project, including your business interests, unique use case, developer availability, climate, timeline, and budget.

If we compare efficiency between React and Vue, we can see that Vue is on par with React.js. Nonetheless, the final effects are largely determined by the application’s scale and optimization attempts. React.js, on the other hand, is ideal for building sophisticated business applications.

If you’ve any concerns about the technology or need a team of skilled developers from Vue JS development company to develop an app then Sanskar is happy to help!